Brexit: Are YOU Qualified to Vote?

Home » Brexit: Are YOU Qualified to Vote? 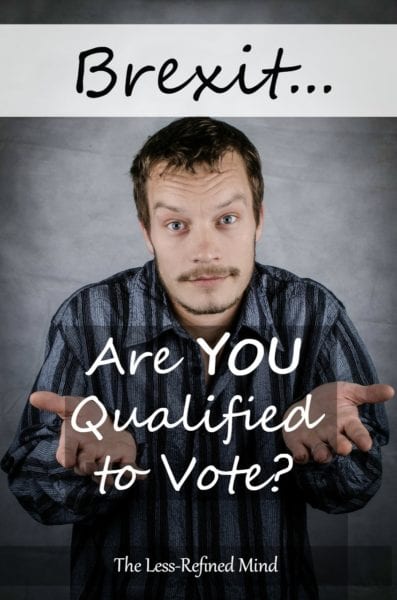 I should probably start off by laying my cards on the table: I am not a gambler. The only loan I’ve ever had is an overdraft, the only debt a mortgage; I use a cashback credit card, which is paid off immediately every month, and I pay my bills in full rather than spreading the payments and incurring higher costs. If I can’t afford something, I simply don’t have it – and quite often I still don’t have it even when I can afford it. That may sound like self-imposed austerity, but for me it’s plain common sense: it’s the reason I’m always in the black these days.

I’m also predisposed to anxiety. Quite possibly this is the underlying reason for my almost obsessive avoidance of debt and gambling. The idea of a commission-based salary appals me (I once renegotiated terms for a new job to a modest but guaranteed income). I like to earn my wage rather than relying on luck or good fortune.

So it stands to reason that I’m an innie. I’m not talking about my midriff, but the impending referendum.

Last night I took part in a crowdsourcing post for a blogger pal, and in reading my peers’ comments I was left deeply perturbed and compelled to write this piece. This may be a good time to point out that I am not a politician or involved with them in any way at all, but neither am I an idiot. In fact, my fear is that I don’t think any of those whose comments disconcerted me are idiots either…

When the referendum was first announced, my immediate reaction was that this was a good thing. We live in a democratic society after all, so of course we should have a say in whether or not to remain in the EU. Emily Davison made the ultimate sacrifice to ensure women have this right, and we should all respect her memory by taking advantage of this privilege.

Except it’s not quite that straightforward, is it?

When I began to look into the arguments for and against Brexit, I felt mildly ignorant. The more I read and listened to, the more confused I became. I started to think perhaps I am an idiot after all, and therefore not qualified to vote. Because I don’t know about you, but I vehemently believe that every UK citizen should be allowed to vote only if they’re informed about the subject in which they’re casting said vote – I’d be all for a mini-exam to establish eligibility.

You May Also Like...   My Honest Judgement of 'Fed is Best'

So feeling uneducated about the referendum, I turned to the oracles also known as my brothers. They are both intelligent, successful businessmen with their heads screwed on. I can always count on them to explain those things which go over my head (physics, algebra, football – politics).

Only this is where I started to become agitated about the reality of the referendum: they were as clueless as I. I wasn’t being as dense as I feared; the fact of the matter is nobody really knows what will happen if we leave. My brothers explained it perfectly:

‘Too many vested interests. I don’t trust anything anyone says. Just go for what you prefer idealistically because you’ll never get sufficient info to decide on practicalities.’

‘Better the devil you know… Idealistically I’d rather be out but I think the risks/unknowns of leaving far outweigh any concrete bad aspects of being in. If I vote it will be to stay.’

Of course, these are opinions of two guys you don’t know, so why should you care what they have to say? Perhaps you shouldn’t. But I should, because they’re my family and they are clever guys, who want the best for their families – and that includes me. Unlike the politicians, they have no agenda in telling me their opinions.

Essentially, the facts are unclear because that’s how they’re being presented to us – there are no black and white answers. My fear, therefore, is that people will jump on a bandwagon without so much as familiarising themselves with David Cameron’s EU renegotiations. The difference between this situation and a normal governmental election, of course, is there’s unlikely to be an option to change our minds in a few years’ time should Brexit blow up in our faces…

You May Also Like...   Term-Time Holidays for School Children: Where Do You Stand?

And so I’m left deeply troubled by the situation.

Not least because it is being suggested that the outcome of a football tournament could affect the way people vote.

I find this incredible on two levels:

Of equal concern is the fact that a massive generational divide is being touted. And according to a poll for the Daily Telegraph, it’s those who are in favour of change that are most likely to vote. Essentially, this leaves those of who are inclined towards the status quo at a distinct disadvantage – unless we act.

Personally, I feel ill-equipped to vote and question the wisdom in putting this vote to the public. As I mentioned, we do of course have an ethical right to vote; we’re morally and legally permitted to do so.

But are we qualified?

Ultimately, this is a question for each of us to ask our conscience. As for my brothers and I, you’ve really no reason to listen to our opinions; perhaps you’d fare better taking note of the tit for tat propaganda peddled by the government…

Friend or Faux: Should You Ditch Your Cliquey ‘Friends’?

What Makes a Bully?

Sick Jokes and Offensive Humour – What Makes it Funny?

Now 20% off ALL kids tees, and 30% off ALL ladies tees in our summer sale! Dismiss