Home » How to Forgive Someone Who Keeps Hurting You, and Why You Should

Some time ago I wrote about positivity and the power of forgiveness. I still believe every word in that post, but a while later a comment was left on the post which made me see I’d not sufficiently covered precisely how to forgive somebody who keeps hurting you. I was literally asked the question ‘what are the steps?’ – and now I’m finally getting around to sharing my process.

For me, the first step to forgiveness was realising that it’s not for the benefit of the person who has wronged you – they don’t even need to know they’ve been forgiven.

Forgiveness is a state of mind; it’s actively choosing not to hold onto the hurt any longer; it is not (necessarily) absolving somebody of their actions.

I’ve recently been involved in a situation where I’ve found myself having to forgive somebody for the sake of my mental health, in order to be able to move on emotionally. And I had an epiphany which has led to me finally writing this post.

How I Prefer to Handle Disagreements

In relationships I care about my preference is always to discuss any issues, so we can iron them out and move forward without them hanging over us. Sweeping problems under the carpet rarely works in my experience and this has, sadly, once again borne out.

You May Also Like...   Why Do Women Wear Revealing Clothes?

In situations where I’m unable or unwilling to have that awkward conversation, or when it fails to resolve the conflict, then I have to figure out another way to move forward. Cutting all ties is a luxury that’s not always available – particularly with family – and when there’s no choice but to maintain contact with the person who has repeatedly let one down, it’s critical for one’s wellbeing to find a way to make peace with that scenario.

How I Sometimes Handle Disagreements, to Keep the Peace

I’ve said in the past that the notion of being two-faced can be shortsighted, that seeing past a lack of respect or fondness for a person, and instead plastering on a smile and making small talk can actually be the more mature and appropriate behaviour in specific situations. I still believe that.

In such circumstances I’ve felt like a fraud and a hypocrite – yet I’ve known it’s for the best. The only person who feels icky is me, whereas ‘being true to myself’ would do nothing but make life difficult for everyone around us. (Obviously this isn’t always the best course of action – if you feel zero sorrow about the fallout and aren’t trying to preserve anyone’s feelings, or if you never need be in the company of the other person then there’s little point in forcing yourself to pretend to like someone!)

But back to my epiphany.

It occurred to me in the midst of this recent situation that, while sometimes it’s necessary to consciously stop being invested in a friend or relative, you can go on enjoying their company when it’s unavoidable.

Essentially, I’ve made the conscious decision to downgrade somebody I’ve cared about deeply to an acquaintance who’s fun to be around.

It sounds mad, but it’s completely true for me: as a way of protecting myself from being repeatedly let down, I refuse to be emotionally invested – yet superficially I’ll continue to socialise and be friendly. I won’t actively seek to spend time with the person in question because, over time, I’d inevitably find myself drawn to them and making an unhealthy attachment (again). But when I find myself thrown together with them it’s okay to make the most of that time and choose to enjoy it.

It’s not the way I’d choose for things to be; it’s not my preference. But it’s my life right now.

Taking this attitude and severing my emotional attachment allows me to take responsibility for my own feelings, and ultimately take away somebody else’s control and ability to hurt me.

You May Also Like...   Comprehensive Low FODMAP Recipes and Drinks Guide 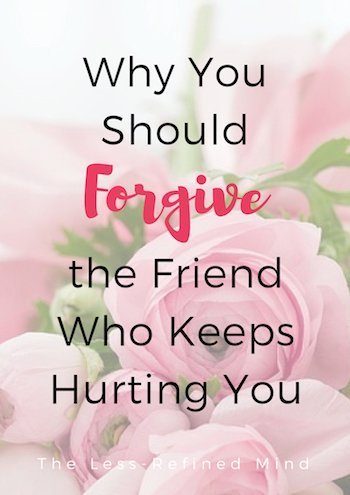 How to Forgive Somebody Who Keeps Hurting You

So, what are the steps to forgiving somebody who continually hurts you?

It feels contradictory, but appreciating that it’s possible to like a person’s company while no longer being able to be invested in them is very freeing.

Doing this is my personal version of forgiveness and being kind to myself. I’m focussing on thinking better, living better… Feeling better. It’s not ideal, but it’s the best of a bad set of options available to me in circumstances I’ve not chosen, yet find myself in all the same.

One of the Best Books About Stranger Danger

Why I’m Not Making New Year’s Resolutions, and What I’m Doing Instead