KateGate: Does She Look Too Good After Pregnancy?

Home » KateGate: Does She Look Too Good After Pregnancy?

Back in May 2015 I wrote a post following the birth of Princess Charlotte. I’m really disappointed that it remains completely relevant following the arrival of the newest Prince (as yet unnamed). So I’m re-sharing and you’re welcome to wade in with your opinions about Kate’s post-pregnancy body and whether it’s possible to look too good after pregnancy…

As I write, Kate Middleton dominates the news: she has just birthed our new princess. (By the time you read this, Kate will have three weeks’ sleep deprivation under her belt, and just be beginning to get over that particular feeling familiar to new mum’s the world over: of having been hit by a truck in our delicate area.) Disappointingly, much of the attention regarding the arrival of the new princess is rather unsavoury and inappropriate, focusing on Kate’s post-pregnancy body.

I’m uncertain whether ‘birthed’ is the accepted terminology when referring to the delivery of a royal, by a royal. But she poops just like we all do, and in reference to the arrival of her daughter, she absolutely deserves the same recognition as the rest of us – she pushed something large out of something considerably smaller. I doubt we’ll ever be honoured (for want of a better word) with the knowledge of precisely how this incredible feat affected her but, for most women, suffice to say it ain’t pretty. And it hurts. A LOT.

So What’s Novel About That?

‘And what?! How is that news?!’ I hear women screaming incredulously at their laptops. Yep, fair enough – millions of women do it every day, so granted – new heir aside – hardly newsworthy. The reason, then, I’m sufficiently motivated riled to write this post?

To be blunt, I’m pretty appalled at some of the outrageous remarks and aspersions bandied about regarding our princess (mother, not daughter). I’m not even a diehard lover of the royals; I’m simply a fellow new mum who thinks that some people appear to require a reminder of what that means, and what it looks like – in ALL guises.

Every woman who gives birth is performing a mini miracle. I didn’t fully comprehend this until I performed my own. I understand that mine is really only miraculous within our family: to everyone else I just did what thousands* of women do every day, and have been doing for thousands of years. Every woman feels this way when she gives birth, and it is awesome in the true sense of the word. It’s breath-taking and astonishing and overwhelming and magnificent. Despite being the most natural thing on Earth, it is magical and inimitable to each of us when it is our body performing said miracle.

*My good pal Google confirms that worldwide, there are in fact approx. 360,000 births per day.

Physically, we all respond differently to pregnancy and birth. And yet every experience is valid. For some of us, it involves chronic conditions, for others acute illnesses that will result in early induction. Some women will gain weight, and in some rare cases women never even know they are pregnant until they are in labour. All are special and all are normal in the context of what has gone before and what will be again.

For every new mum (in my experience), there is a sudden realisation and understanding between us; a respect, if you will, for what we’ve endured in order to perform this marvel. We look at each other and know something on a primal level that was not there before. And though we may share stories, we do not compare. For every experience is unique to the woman who endured it, and each is momentous.

Is It Possible to Look Too Good After Pregnancy?

I find it both undermining and distasteful, therefore, to learn that some people have made negative comments based upon Kate’s appearance hours after the birth of her second child. Because she looked ‘too good’.

In the same way that it’s wrong to bash women for being overweight or for being too thin, so it is wrong to shame a woman for going through labour and coming out looking well. To suggest, based upon this fact, that she has not given birth at all is beyond the pale – and, frankly, offensive.

Before I fell pregnant, I forced myself to accept and come to terms with the idea that in having a child I would become fat: I’ve been fat before, ergo an inevitability of carrying a child was to become fat again. Despite having spent the previous few years working my backside off (literally) in the gym and living a healthy lifestyle, I was still totally convinced that it was not a choice but a given.

I didn’t have an especially flatteringly-shaped bump, though neither did I gain very much weight during my pregnancy. I stopped spinning classes at 16 weeks, lifting weights at 32 weeks, and I missed my last swim because I was unexpectedly induced at nearly 38 weeks. Though I swim most weeks, I’ve struggled to get back into the gym, and therefore I’ve lost a lot of muscle. This means that contrary to my belief, I have in fact lost weight and am the smallest I’ve been in a number of years.

You May Also Like...   What's the GAP Programme and How Will it Affect My Pregnancy?

Update: I’ve now had a second baby myself, and turns out I’m one of those annoying women who bounces back quickly. After Elfin (a fantastic delivery, I was very lucky) – I was out and about within two days. So, it’s not just about appearances – women manage childbirth differently, dependent upon many factors. It doesn’t make them ‘better’ or ‘worse’; it’s simply a fact of life.

It also doesn’t make them fair game for unwarranted and unkind comments.

I do not say this in order to shame women whose bodies have responded in a different way to what is undeniably a massive, ongoing toll.

I say it in order to demonstrate the misconceptions I held, and the proof I’ve seen that I was WRONG; to show the alternative possibility to becoming overweight during or after pregnancy. And to address and challenge the societal expectations that led me, as an intelligent and educated woman, to hold that belief in the first place.

In hindsight, I believe that I gave my body the best chance at being and remaining healthy through gestation and beyond. I did this for my baby, and despite some complications early on, I like to think that I bore a healthy child and have given her the best possible start. While it may stick in the craw for some that I’m not embarrassed to say so, I am proud of having looked after myself – and in doing so, my daughter too. I worked damn hard to keep myself in my best possible shape, both mentally and physically – why shouldn’t I take pride in that?

Disclaimer: I am coming clean (before I’m outed) to the fact that I currently subsist on too much cake and not enough exercise. However, I have two excuses reasons for this. Firstly, as the mother of a baby who sleeps poorly, I am chronically knackered, and if I didn’t regularly imbibe the sugar and caffeine I constantly crave, I’m not certain I would survive at all. Secondly, as a breastfeeding mummy, I struggle to maintain my weight. Without the cake I would be a rake. I am fully aware that this cannot go on forever; and I am totally confident that when the time comes I will demonstrate my iron will (as I’ve done before), and go back to a completely healthy lifestyle. In the meantime, I devour my veg – and I have my cake and eat it too. I am responsible and accountable for the health of myself and the well-being of my baby. In the short-term my sanity is of paramount importance to my child; in the longer-term cutting back on sugar will be beneficial to my body.

I absolutely sympathise with those women who have tough pregnancies resulting in physical limitations or medical conditions which prevent them from eating healthily and/or exercising during pregnancy. I simply refuse to subscribe to the school of thought that pregnancy is an illness or a valid reason to give up. For those able to begin or continue a healthy lifestyle, I now know it is possible. I’ve both seen it and done it. It is merely a case of inclination and determination.

The insidious problem with the very english English? This may be controversial, but I’m going there anyway: we are so afraid of causing offense, that we have stopped speaking common sense. Even when faced with the questionable logic of a few misguided souls. (I actually wrote about it last week in my post Can Political Correctness and Common Sense Co-Exist?).

Kate had a team to help her look fabulous – of course she did – as she does every time she makes a public appearance. But as far as I’m concerned, the fact that she was in heels was far more impressive than the expression on her face: even if she were exhausted, she had just performed that little miracle I mentioned earlier; for her family – but in Kate’s case, for the whole country too! (No pressure then.)

You May Also Like...   Alcohol When Pregnant - How Much Is Too Much?

I think that gives her the right to look pretty darn pleased with herself. And yes, shock horror; it also gives her the right to appear more happy than tired – without inviting criticism for doing so! (Besides which, whilst many of us have perfected the art of the strategic white lie in order to snag that potential client, Kate’s job has been to master the façade of elegance, poise and composure – regardless of how rough she’s feeling and yes, even after having just given birth.)

Enough with the Disparaging Comments!

Isn’t it time that we started to applaud those women who take care of themselves during pregnancy, and encourage those who don’t? And rather than an excuse for a growing minority to make hurtful, unnecessary comments, isn’t the birth of any baby – but especially our heir – a time for celebration that mother and baby are well?

High fives, Kate. (Because we all know that in a few weeks’ time the mask will slip and she’ll be feeling as grotty as any other new mum living on a diet of coffee, cake, and adoration of her personal mini miracle.)

Do you think it’s possible to look too good after pregnancy, and can that be damaging to the masses? Is it irresponsible to show women looking fantastic mere hours after delivery? Let me know your opinions in the comments below.

Putting the Finishing Touches to Our Playroom – With Posterlounge 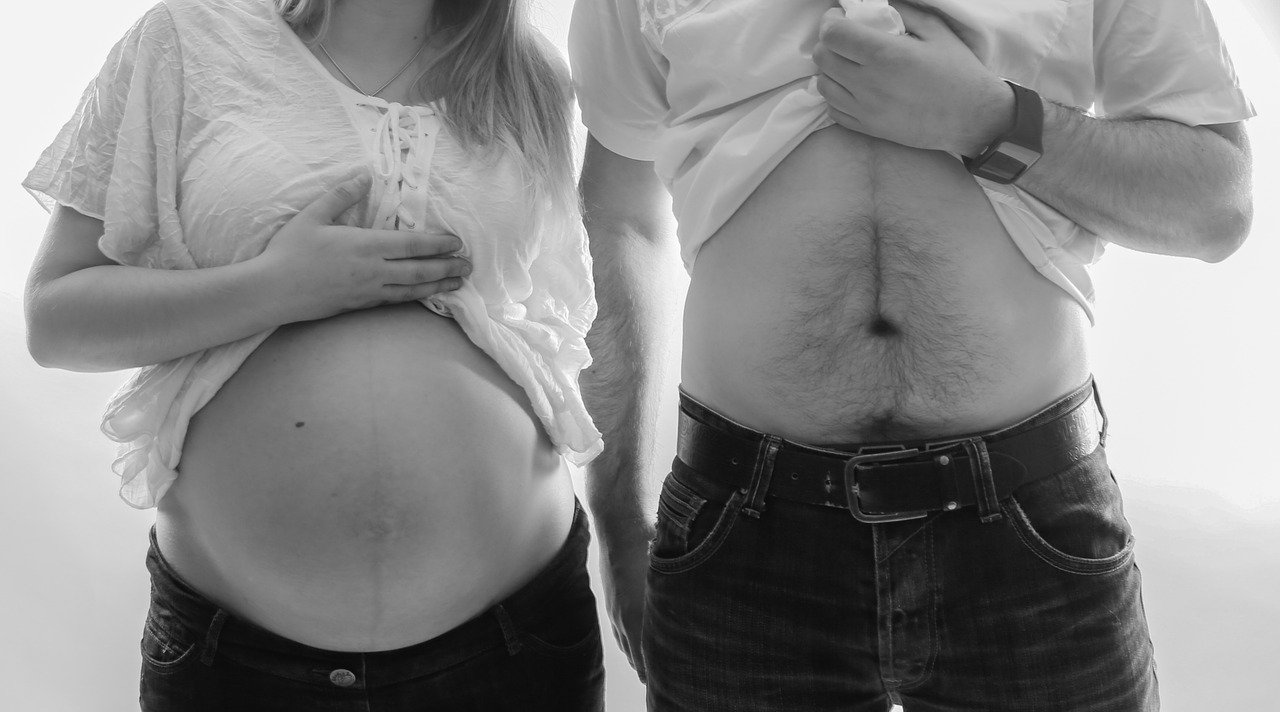 Top Tips For a Positive Labour and Delivery