Pixie was a horror when it came to trying to transition her from our bedroom into her nursery. At that time I truly believed that our future second child must surely be a breeze by comparison. (Ha. Ha, ha, HA.) One way I sought to charm Pixie into a cot without my constant reassurances (I don’t subscribe to methods involving CIO) was by enlisting the help of an ally: I felt certain that the most painless strategy would be to encourage toddler attachment to a soft toy. Any one would do, so long as she loved it.

But no matter what I offered, for the longest time Pixie was simply not interested.

Over the course of several months I tried many things, with varying (but ultimately limited) success. Each time we attended our Sing & Sign classes we’d have a different toy, because the one from the previous week had been cast aside. I felt sorry for those toys, and I’m sure the other mums did too.

I eventually came to the realisation that my daughter was more fickle than most: she would appoint her flavour of the day – and then she’d quickly lose fascination. I became determined to find something to captivate her…

Toddlers being toddlers, of course she was always going to do things her own way in her own time, and at around eight months old, she finally attached to…something. Here’s a list of the weird and wonderful items Pixie grew to love intensely, if briefly:

Toddler Attachment to a Ball

Her first love. I’ve been through all of my baby photos desperately looking for one of her with this damn ball, and I’m so disappointed not to find any! You know the small plastic balls you find in a ball pit? She slept with one of these held in her hand for months.

Toddler Attachment to a  Bottle

She became quite attached to drinks bottles, needing milk at night time not to drink – but to cuddle. Many a time I’ve had to stealthily feel around in the dark post bedtime to retrieve said comfort, in case she’s tried to drink from it during the night. (Once or twice I’ve forgotten and that ain’t pretty the next morning.)

Toddler Attachment to a  Sponge

I don’t even know where this one started, but even now she occasionally like to cuddle a sponge in bed; it should be soft, round and pink. Once or twice we’ve had tears at bedtime when I’ve refused to allow her to one, still sopping wet sponge from her bath, to cuddle in bed.

We have so many sponges kicking around our house.

Toddler Attachment to a An iPod

I have an iPod from years ago which since I stopped running has not really been used. It’s small and blue, and quite attractive if I say so myself. Pixie calls it her phone and I allow her to play with it since it’s pretty much obsolete. Just last week she took it to bed, and twice that night I was up fishing around down the side on the floor looking for it. I have now banned it as a bedfellow.

Toddler Attachment to a  Wipe

I saved this for last because it’s probably been her most consistent and greatest, most enduring love. For as long as I can remember and still today, Pixie loves to take a wet wipe to bed to cuddle. Often when I‘m tucking her in she’ll request a wipe to cuddle, and equally often she’ll shout for me an hour later asking for a replacement because it’s no longer wet.

At 3.5 years old, Pixie still does not have an absolute favourite toy: she’s still fickle and she’s still unusual, with the only consistency being for the above items. But perhaps I’m a bit weird too because I find my little girl’s eccentric idiosyncrasies quite endearing!

I’m also sorry to tell you that even once attached to these various inanimate objects, Pixie was never an easy toddler to transition. I eventually used another method which was gentle but long: there are no shortcuts here sadly. I’ll do the same with Elfin when the time comes. I’ll write about in details soon, but in the meantime suffice to say it involves a lot of patience and perseverance, with false starts and setbacks along the way.

What are your thoughts on toddler attachment to a soft toy? Is it something you encouraged, or did it happen naturally for your little one? 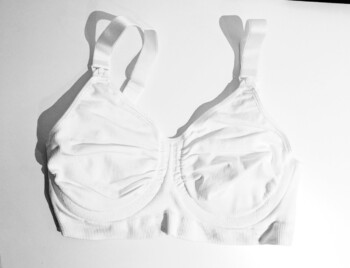 Carriwell GelWire Bra – The Most Comfortable Bra I’ve Ever Worn!

We Created This Awesome Space in Our Understairs Cupboard!