When our first daughter was born I decided to create a series here on the blog to help my husband better understand women and hopefully facilitate a wonderful father/daughter relationship (read more about the concept here). The format is basically me answering any question my husband puts to me, and this week’s question is: what age should you start shaving?

Hubby: Hair removal… I feel a bit weird asking about this in relation to our baby daughter, so let’s just talk about women in general. I don’t even have a specific question, so you can just tell me about it I guess. Also, though it seems weirder still to be talking about it so prematurely, when do we need to talk to our daughter about this stuff? Do we need to? It’s not mandatory after all, though I totally get that it may as well be… What are your thoughts?

What Age Should a Girl Start Shaving?

Me: I’m so glad you’ve asked about this. It’s something that became a massive issue for me as a teen – but not because I resembled Big Foot. Allow me to explain…

At school, there comes a time when we can’t help but begin to notice certain changes in our peers. For me, it became most notable during PE. I’m not referring to getting changed and seeing some girls developing breasts; I’m not even talking about some girls opting out of swimming lessons sbecause it was their time of the month. I speak of the arguably less-of-a-big-deal issue of body hair.

You’re probably expecting me to talk about the embarrassment of pubic hair. Nope! I’m specifically referring to leg hair! I know, I know – in the grand scheme of things, how very trivial, right? Wrong.

Those other changes were markers of becoming a woman; physical signs of our maturity commanding respect from our peers. Pathetic really, but that’s how it worked in our juvenile school hierarchy.

Anyway, there was one aspect of becoming a woman for which it was vital all evidence be immediately eliminated! In fact, the noting of it was in its prompt removal. So, as the downy fluff on our legs became more noticeable (or maybe even before in some cases), so we started to shave our legs. This was a critical rite of passage in order to avoid becoming a pariah.

What Age Should You Start Shaving?

Alas, some poor souls (aka ME) were verboten by our mothers. It became a battle of wills, and in hindsight, perhaps a metaphor for the petty power struggles which followed about my body: I was not allowed to shave my legs; to dye my hair; I was not to have any facial piercings; nor to stay up past 9pm (until my late teens, when it was extended to 10pm).

There were so many things I was not allowed to do – some of which as an adult and a mother I now accept as being for my own good; others which I’m adamant I shall not repeat with our daughters. I’ve little doubt that much of what followed, including my teenage depression which came close to developing into a serious eating disorder, can be attributed to a lack of freedom with my own body.

It’s true what they say about babies: the one thing you can’t control is what they swallow; if, therefore, they feel a need to assert control, this is how it will manifest. That doesn’t change as you grow older.

My mother’s reason for not allowing me to shave my legs? She told me it would make the hair grow back thicker and coarser. (Not true by the way.) So, a concession was made: I was allowed to use the bad boys of the hair removal world known as hair removal mittens. Never heard of them? Can’t say I’m surprised… Suffice to say, in my experience, they were a massive pain and they didn’t really work.

Naturally, the end result was that I shaved my legs in secrecy. Sad, but true. And precisely the type of situation I want to avoid with Pixie and Elfin. It’s so unnecessary, and after you’ve broken that trust once, it becomes easier to do so again. And again. I don’t want that for us and our daughters; we can all do better – we all deserve better.

So, back to the matter at hand. There are three ways of removing hair which I’d recommend to our girls: shaving, waxing, and epilating.

As always, I feel it’s our job to educate – and then allow them to make their own decisions about their own bodies.

(Cost may be a factor, and safety is definitely relevant, ie. I’d far prefer them to use decent quality, zero waste razors which are less likely to nick and better for the environment, or to buy them epilators.)

Do I feel we should go out of our way to encourage our girls to eliminate any womanly hair growth? Maybe just in particular areas? Is there a specific time we should broach this subject with them? No, no, and no. I’ve no doubts that they’ll have their own feelings about it early on if my school days are anything to go by. For the sake of their sanity, we must respect them.

If they choose to conform for their own reasons, no problem; I understand that need. It’s if they feels they have no choice that it becomes intolerable for me as their mother. 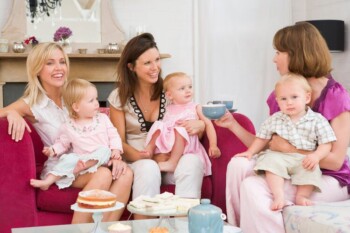