Taking our daughter home was special and wonderful. We couldn’t wait to show her off, so naturally we were disappointed that one nanny was abroad, and the other was unwell, but we had a brief visit from my brother-in-law.

And then disaster struck.

The midwife came to check us both over, and expressed concerns about Pixie’s lethargy and ‘jittering’. She didn’t look ‘sick’, but I was a little anxious about the fact that she wasn’t waking to feed. We were told to call him straight away if it got any worse. This was my first introduction to the terrible dance of having parental concerns yet not wanting to appear an overly-cautious new mother. However, Pixie deteriorated over the next couple of hours and the point came where we felt we should not ignore it.

The midwife arranged for us to go to A&E where we would be seen to immediately; his attitude was like flicking a switch, and I was suddenly and overwhelmingly gripped by instinctive mummy fear.

I was a wreck as I ran in with my tiny new baby while hubby parked the car. I was shaking and had tears rolling down my cheeks. In any other circumstances looking so wretched in public would have been bothering me, but I was too frightened to think of anything other than my baby girl.

We were ushered to the head of the queue, which in itself made me even more terrified. By now Pixie had been sleeping and jittering almost constantly since the midwife had seen us, and I was beginning to panic that something was very wrong. For the rest of the afternoon, in between desperately trying to encourage feeds, I watched my fragile infant being used like a pin cushion, enduring six heel prick tests within two hours. It tore me up.

But the worst was yet to come…

When it was discovered that our daughter was dangerously dehydrated (caused by the lack of interest in feeding due to lethargy), we were admitted.

The nursing staff wanted to try bottle feeding our baby to see if she’d do better with that, but I forcefully refused as I was adamant I wanted to continue breastfeeding. They attempted to cup feed her instead, but she was too slow in taking it.

Eventually, a doctor made the call which probably saved her life: she was to have an NG tube inserted up her nose and into her stomach. Still not fully comprehending the dangers of dehydration in a newborn I was horrified, and when they went to prepare I insisted that my husband ask twenty questions to ensure there was no alternative. There wasn’t.

I asked if we could be with her during the procedure and was advised to stay away for my own sake. When I think back to that time, I can’t quite believe I agreed. My baby was not yet 24 hours old; I was still recovering from the spacing out effect of gas and air, lack of sleep, and – you know – giving birth.

I asked whether we’d hear her cries from our cubicle on the ward and was assured we wouldn’t. I bawled and did the hardest thing I’ve ever had to – I handed my tiny and delicate new baby over to the nurse and watched her take her away. Hubby climbed onto the bed with me and held me while I sobbed, trying to be strong for me but close to tears himself.

And then we heard our daughter’s screams.

I wailed like a wild animal, frightening myself. I literally had no idea I was capable of making such an anguished primitive sound. My husband, by now crying himself, pressed his hands on top of mine and clamped them over my ears, holding me tightly. Our angel was quickly returned to us, already peaceful – it had been worse for us than it had been for her.

We hated the tube. We wanted her well and it was a constant reminder of the fact she wasn’t as healthy as she should be, that because she was so weak I wasn’t able to feed her as regularly as she needed. I made the decision that no photos were to be taken of her like that, I think it was my way of refusing to allow it to define our first moments with our new baby.

During that time I received some fabulous  support from FAB (Families and Babies), a wonderful resource of help available in the hospital. I was encouraged to pump regularly, every 2-3 hours including through the night in order to increase my milk supply. Using my expressed milk and topping up with formula, our daughter was quite literally force fed – sometimes until she vomited. It was distressing, but necessary to stretch her stomach and encourage her to feel hunger. 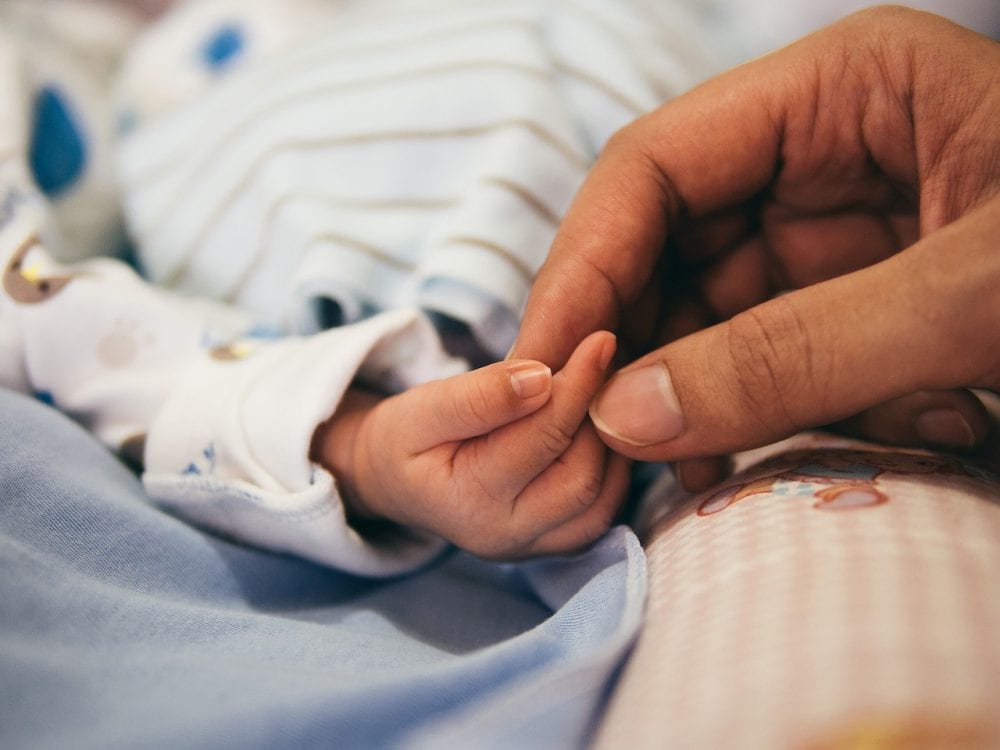 The Loneliness of Hospital

My husband was made to go home each evening, and I quickly felt institutionalised. It’s amazing how much of a bubble you exist in when you’re confined to a tiny space. It didn’t help that my parents-in-law were abroad and my mother was too poorly to visit (she wasn’t allowed near Pixie), and so I had only my husband to lean on who was as overwhelmed by the situation as I was.

I was so exhausted and traumatised that it was only when I spoke to my best friend a few days later once we were home that she pointed out I’d not contacted her to even let her know we’d been back in hospital. And I couldn’t quite believe it. She was right, of course, but I just literally didn’t have the capacity to think to call her. And yet if I had she’d have come.

After two and a half days, for the second time, Pixie was declared fit enough to go home. She weighed just 4lb 15oz at that point. She was carrying so little body fat her skin looked too loose, giving her a wrinkly appearance – but she was well.

Traumatic though delivering a baby can be, there are worse things. In the end, your child’s wellbeing supersedes all else.

My next pregnancy post will discuss the reasons behind the complications with Pixie’s birth. Subscribe below for email notifications so you don’t miss out!

Our Birth Story: Failure to Thrive and Pixie’s Early Induction

How to Detect Dehydration in Newborns

Baby Sleep Products to Help Your Baby (& You!) Sleep Better