When I first wrote this post back in 2015, maternity discrimination was still a huge problem in Britain. Sadly, pregnancy discrimination appeared to be equally rife – and little has changed. In the 21st century, when legislation has been implemented to prevent either from occurring, this is not only ridiculous and unpalatable – it’s also illegal.

Maternity and Pregnancy Discrimination are Unacceptable

And yet it’s widely tolerated. The insidious issue is played out across the country on a daily basis, when (mostly) small and medium-sized firms who tend not to have HR departments not only ignore the law – but also get away with doing so. The details of individual cases may vary, but the result is inevitably the same: women who do no worse than choose to continue our species are left out in the cold by their employers, and sometimes worse.

In many circumstances, those guilty of direct – but implicit – discriminatory practices and behaviours appear to be entirely fearless. And is it any wonder when the law is technically on their side? The spirit of the law, of course, is that these situations should not be occurring; but the reality is that they do – because they can’t be proven.

I’m incredulous that there are both men and women in our developed country who think nothing of applying immense pressure on pregnant women, and in doing so cause them great stress.

Don’t get me wrong, I absolutely appreciate that pregnancy is not a disease and shouldn’t be treated as such (unless of course there is an associated illness). But whether the pregnancy is progressing with or without complications, when is it ever acceptable to cause these women to miss important appointments/refuse to pay them properly/bully or harass them (the list goes on)?

In the UK, when a company feels like it, apparently.

It’s a serious concern because by allowing this to go on in spite of legislation to prevent it, society is passively condoning it.

How It Should Be

Most people are almost reverential in their regard for pregnant women, and that’s as it should be. Whilst there’s no requirement for special allowances in terms of promotion either legally or morally – of course! – there’s undeniably a need for special consideration of physical needs – and up to a point emotional needs too. These women should be supported; they should never be persecuted.

You May Also Like...   How New Parents Are Unnecessarily Terrorising Mums-To-Be

So used am I to observing and receiving chivalry from the generic gentleman in his various guises – my husband/father/brothers/the guy in the shop/stranger on the bus/the postman – that I genuinely struggle to comprehend any other attitude in men. Yet they exist; indeed, they’re functioning people in possession of all their faculties; and they are many.

While these men may well be affluent, I will never consider them to be successful until they appreciate and embrace the basic concept of respecting and valuing pregnant women – and absolutely do not take advantage of or intimidate them.

These cretins have mothers, wives, daughters; I’m not speaking in generic terms – I know some of these men have families. And it confounds me that they’re able to pass over women for promotion/bonuses/contribution in meetings, simply on the basis of their pregnancy/maternity status.

Not only that, but in some circumstances they actively seek to dismiss/strongly encourage resignation too. In Britain; in the 21st century. Culturally in terms of child-bearing, it seems we’re going backwards, not forwards. This does not make Britain ‘Great’ – it makes Britain shameful.

I’d like to take this opportunity to point out to those ‘encouraging’ stay at home mothers back into work: fix this discriminatory problem and I wager it would go a long way towards fixing that problem too.

Take my friend; we’ll call her Sally. Sally worked hard at her new company for a year before falling pregnant with her first child. Not only did her manager second guess the pregnancy on the basis of two medical appointments early on in the first trimester, he then told the MD of his suspicions – before making an unsolicited promise to Sally that he would keep the information to himself.

Subsequently, Sally was reprimanded for under-performing in a sales capacity. When she stood firm in her assertion that she was not a salesperson which she had made clear at her initial interview, she was asked to move her desk into what was essentially an unventilated store cupboard. This was in the height of summer, by which time Sally was heavily pregnant.

She took advice from ACAS and put in a request to remain at her current desk. When the MD called her into his office to discuss the matter, she was verbally abused and bawled at for her excessive demands; lack of effort; and underperformance. The MD threatened to cut her pay by a third and told her explicitly that she was ‘not earning her keep’.

When accusations were made of customer complaints about her attitude, Sally was utterly bemused and perplexed. The MD threatened to bring her manager in to explain the allegations, clearly anticipating Sally would concede her wrongdoings; however, she encouraged the MD. Her manager was unable to defend the claims he’d made against her and the MD cooled down. Alas, this was temporary…

Not only did Sally encounter intimidating aggression from her MD, she also faced fabrications from her manager who was trying to save his own neck by throwing her under the bus.

Unfortunately, given the extreme nature of the meeting, Sally was left with no alternative but to begin her maternity leave with immediate effect. She never returned.

Given the degree of hostility levied towards her, Sally chose to raise a grievance. And this is where legislation falls down:

The company had no impartial authority to oversee the procedure. Essentially, Sally raised a grievance against her MD, and her MD was in the smug position of handling her complaint; which he naturally rejected.

Even if she had chosen to pursue her case at tribunal (which would have cost her), she had a very slim chance of winning – because for fear of losing their jobs too, other staff  lied in their ‘evidence’ – all witnesses, of which there were many, felt gagged. Sally effectively lost all support and the entire situation was manipulated to make her look like a lazy trouble maker. She didn’t stand a chance.

Alongside the huge degree of stress Sally experienced in that fateful meeting, prior to it, and as a result of it; she was worrying about an emergency induction and a poorly, premature baby.

Which inevitably meant family became a priority, while justice became an unjustifiable luxury – precisely what arsehole bosses rely on. 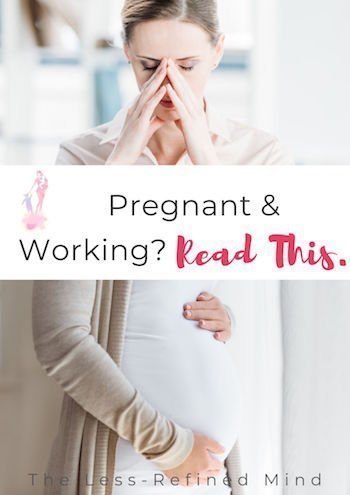 When I wrote this it was still very raw and I had concerns about the legal implications of being totally frank. As things stand today, I don’t. I was treated appallingly and I’m not ashamed to be open about that.

Today, I attribute my daughter’s difficulties at birth to the immense stress I was placed under at work: there was no obvious physical cause and high levels of stress can lead to failure to thrive. I’ve since gone on to have a completely healthy baby, which further reinforces my belief.

And that awful man got away with how he treated me – and the impact that had on my tiny baby’s health – completely scot free.

Credit where it’s due, I also have that horrendous time of my life to thank for this blog, which I’d never have started if I’d had a job to return to!

So What Can You Do if You Find Yourself in This Situation?

Sadly, there is very little to be done as things stand. Businesses know their legal obligations, and provided they remain inside of the law – or at least ensure there is no possible way to prove otherwise – they’re safe. So, my best piece of advice?

Should you be planning to have a child in the near future, ensure the company you work for is pro family. And if they’re not? Find one that is. I wish I could say different but with current employment laws in force, you will not win this war.

Resonate? Please share this post to promote the cause and garner support for working families. I’d love to hear your stories in the comments.

Marriage: The Next Generation

Should You Hire a Make-Up Artist for Your Big Day?