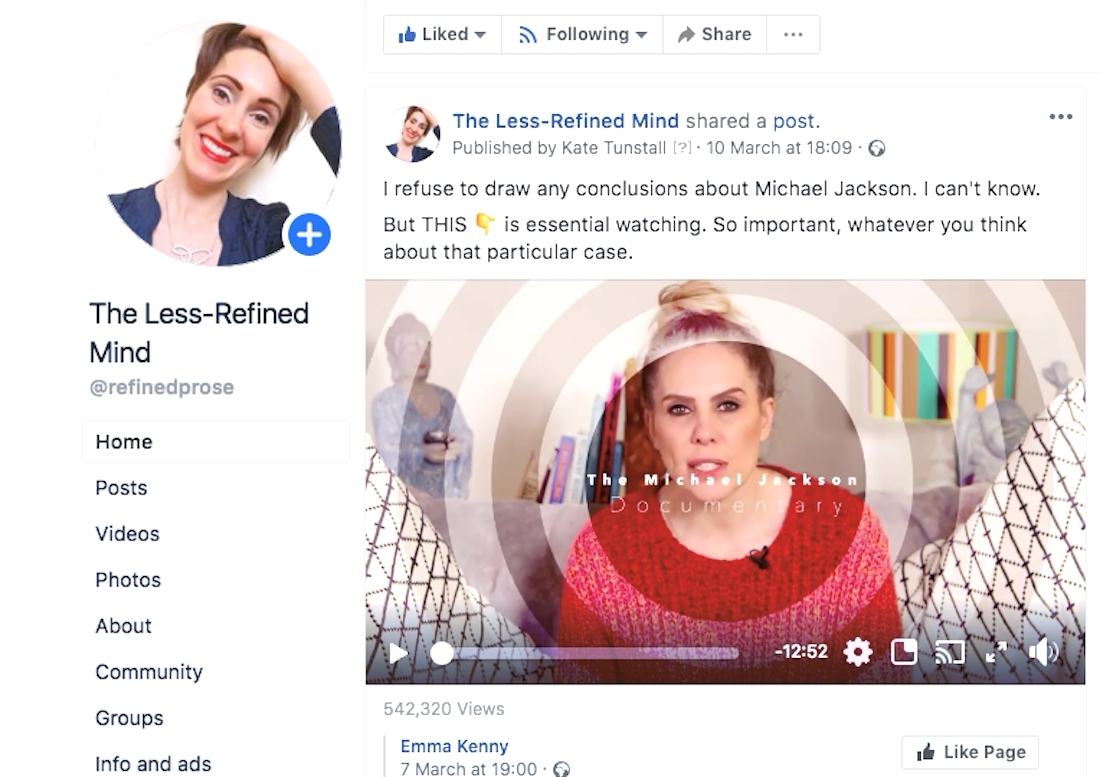 This Morning’s Resident Psychologist, Emma Kenny, on How to Prevent Sexual Abuse

Home » This Morning’s Resident Psychologist, Emma Kenny, on How to Prevent Sexual Abuse

My husband and I were curious to watch Leaving Neverland when it aired, but because we have young children Dan found it too difficult to watch and we soon switched over. I’d still like to finish watching at some point because, like most people, I’m curious about the icon – did he or didn’t he betray his legions of fans and, more importantly of course, those men; those children? Whatever the truth, there are lessons to be learnt, specifically how to prevent sexual abuse.

One of the difficulties I know Michael Jackson fans have is assimilating and making peace with the concept of both admiring – and in some cases hero-worshipping – the musician whilst simultaneously deploring his alleged actions. Perhaps there’d be less polarisation if people could be comfortable with the idea that regardless of the allegations, recognising his undisputed talent is acceptable – the two things are not mutually exclusive.

Will We Ever Know the Truth About Michael Jackson?

I suspect that in their wishes for the accusations to be false and their fear otherwise, many people are refusing to accept that the actions of the men involved are anything more that wicked fabrications. And of course they might be. They also might not.

It seems some have forgotten that at the heart of this hugely emotive issue is a potential case of devastating child abuse which can, naturally, have lifelong implications. And that’s a situation which should never be undermined.

Personally, I refuse to draw conclusions as to the reality of what did or did not take place between that man and his accusers.

We cannot know. Presuming otherwise is both arrogant and dangerous.

Whatever the truth behind this specific case, we must not lose sight of the importance of remaining open to victims coming forward. They must feel that speaking out will lead to support, and not contempt or repression.

Emma Kenny’s video on the subject spoke to me and offers excellent insight into what’s a difficult topic:

I found the video so thought-provoking that I reached out to Emma and asked her if she’d consider an interview about the case and the wider issue of child abuse, and I’m privileged to share her thoughts on the matter with you below.

You May Also Like...   The Millstone of Vulnerability as a Woman and a Mother

i) Please tell us a bit about yourself?

Hi, I am Emma, I work as a Media Psychologist, a psychological therapist (at my home clinic), and present and appear in lots of crime shows. I am the resident Psychologist for This Morning, and I write the life column for Closer Magazine. I am also the safeguarding expert and psychologist for Channel Mum. My other role is being Mum to two fabulous teenage boys Tyde 16 and Evan 14, and I have 3 dogs and 2 cats! I am a vegetarian since 9, and my whole family are also plant based. (Gin is a plant right?)

I have an unbelievably small life, just round the corner from where I grew up. I love baking, because I love eating, and my hobbies include sleeping, and…yeah, to be honest pretty much sleeping nails the hobbies!

I have a passion for the welfare of young people and I specialise in treating sexual trauma and associated issues.

ii) What drew you to working in your field?

I was made to see a Psychologist as a young person, and truthfully I found the sessions unhelpful, boring and patronising. I couldn’t understand why adults struggled to speak to me as an equal and I felt that I could do a better job. I have always been interested in people; I am the person who will unapologetically ask you, as many questions about your life should I meet you in a social setting. I am terrible at small talk, and instead go for the meat of what makes you who you are.

I guess I have always enjoyed listening to problems, as I tend to see solutions easily. Aside from these points, I work with hope; every client is on a journey to a better understanding of who they are and of what they need. What’s not to like about that?

On Michael Jackson and ‘Leaving Neverland’

iii) In the wake of Leaving Neverland, do you have concerns about the public’s reaction to the men involved?

I felt very sad about some of the public reaction to the men in the documentary. I totally understand the passion and love for Michael Jackson; he was without doubt an iconic talent. As a young man, he was denied his childhood, he was beaten and he was ostracised from children his own age. These issues affect people for a lifetime and can translate in their behaviours.

I see Michael as a victim, but that cannot excuse any subsequent actions that may have occurred.

What worried me about the hate towards his alleged victims is the impact that their sentiments could have on victims and survivors of sexual abuse.

I cannot explain how unusual it is for children to disclose their sexual abuse. The majority of clients that I have worked with and groups that I have facilitated have been full of women and men who did not disclose their abuse. Even those who dared to were often disbelieved, or the result of the disclosure so traumatic and immediately life changing that they retracted their accusation and were then branded a liar.

One of my clients after seeing the hostility online contacted me and said, “I will never tell anyone else that this happened to me” and that is why I did the video.

I cannot express the utter impact the generalisations and myths are having on those who have been, or indeed are being abused.

iv) Would you describe yourself as a feminist, and do you think this is a feminist issue?

I hope every woman would answer yes to this question! I believe that sexual violence remains a gendered issue. Yes, this affects boys, and men, and I am not underplaying this, but the figures do not lie. Also, as we move though age frames, once again, the issue of sexual violence towards women plays out in statistics. The impact that abuse has in a girl’s early childhood is far reaching and often plays out as she moves through her later life.

You May Also Like...   The Zero-Fuss, Zero-Waste Idea for Kids Gifts This Christmas

v) What’s your personal opinion about the programme?

I think the programme is a very hard watch. As a mother, I struggle with the collusion of the families involved. I appreciate no one believed that Michael was abusing their kids, and clearly, many of the boys that he spent time with had only good memories, but for me, it was an absolute failure of care.

The men who accuse MJ seemed authentic and the idea being peddled that they are only doing this for the money doesn’t seem relevant. Why would anyone wish to be attacked so publicly, to be ever known as the boys who were sexually abused by MJ?

I think I felt a sense of global collusion to some degree.

I cannot say that Michael abused those boys. What I can say is that the world looked on as a 40-year-old man shared a bed with unrelated children as young as 5 and failed to challenge him. Maybe he groomed us all.

What struck me most was Michael’s callousness, he made these boys the centre of his universe and then he moved on, dumping them and making them feel utterly worthless, simply replaced by another younger, blonder, whiter version of who they used to be. Imagine how devastating that would be, imagine the lengths that you would go to in the hope he would bring you close to him again?

Signs of Abuse in a Child

6. Whatever the public’s opinion, I’m sure we’d all agree that it’s a highly emotive subject and all feelings stem from disgust at the prospect of child abuse, and fear of it taking place effectively ‘under our noses’.

vi) What are the signs of sexual abuse we should be watching for in our children?

The more obvious ones can include:

However, the sad fact is that most of the time you will not know because child molesters are also your children’s allies.

If it is a parent, the child will often put up with the abuse because they initially do not understand it, and subsequently become embroiled in a belief system peddled by their abuser. The most common reality is that victims remain silent.

You May Also Like...   Everything You Need to Know About Car Seat Safety & Legislation

vii) How would you recommend managing a situation where there’s a suspicion of abuse taking place?

It is better to be safe than sorry, so speak to social services, or inform their school or nursery. I would rather an investigation take place only to discover that there was no issue, than to ignore a child who was being abused.

How to Prevent Sexual Abuse

viii) Is there a specific conversation you’d recommend parents have with their children in order to help protect them, and what is the ‘right’ age to have this?

I have discussed these issues with my children since they could communicate. You will not steal their childhood innocence by discussing appropriate touch, or teaching them should they ever be made to feel uncomfortable to tell you.

I have never forced my boys to hug, or kiss anyone, they understand consent and I allow them to practice this on their terms. So try not to force kids to physically get close to people they feel a little uncomfortable around.

ix) What are your top tips for safeguarding children?

Too many, so direct to https://www.nspcc.org.uk/preventing-abuse/keeping-children-safe/ amazing resource and also https://www.stopitnow.org.uk/resources.htm.

x) Is there anything else you’d like to add about this subject, to help reassure parents and advocate for young children?

I guess my main advice is to talk about sexual abuse openly with friends, colleagues, relatives, and your kids. If we create a permission base to discuss the subject and if we make it clear that we believe this affects people everywhere, then you will help to break the silence and prevent the shame.

I feel Emma’s suggestion that we were all groomed is a very poignant one, which we’d all do well to think on. None of us have the right to presume what truly took place, but I think we can all agree that a man befriending children is not the natural order of things and in any other circumstance we would not facilitate such a relationship.

When and How Should We Teach Our Children About Sex?