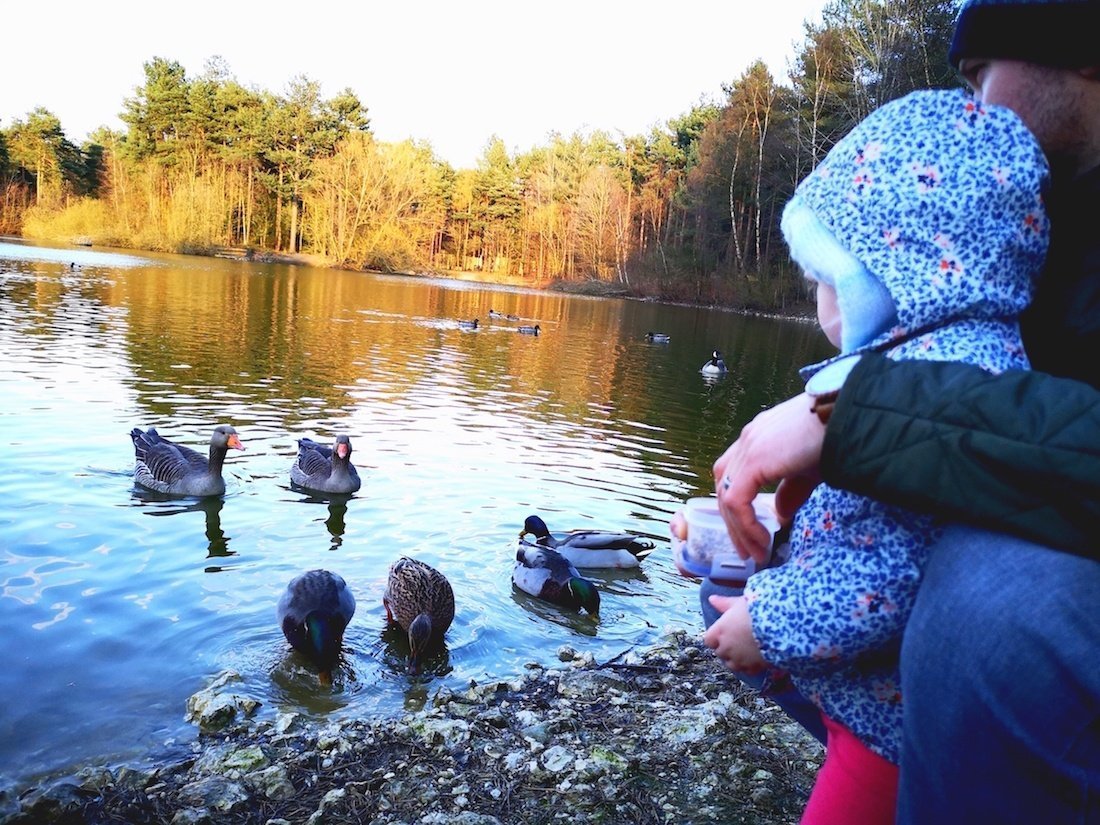 Are you even a young family if you don’t regularly visit Center Parcs?! We’ve been to a couple of the sites and this is my Center Parcs, Elveden Forest review…

I’m not the most decisive person. I’m that annoying diner in the restaurant who sends the waiter away not once (reasonable – we’re chatting), not twice (acceptable – we’ve ordered drinks and the menu is vast) – but three times (no valid excuse).

So when hubby and I bit the bullet and made the (arguably brave) decision to take our first family holiday sans any help from grandparents, we (I) took our (my) time choosing where to go. And when to go. And for how long to go… You get the drift.

In fairness, the biggest hurdle was in making the decision to actually do it – after all, we parents are fully aware that a holiday with a toddler is not, in fact, a holiday. So I was torn between the daily grind at home without hubby (free), and a pseudo-break away with hubby (cost of a few hundred quid). I found myself overwhelmed by thoughts of the effort of packing; the travel; the expense… Was it all worth it?

But once the decision had been made, choosing the destination was simple.

It wasn’t hard to veto going abroad. In an ideal world (ie. with a nanny and an infinite budget) going travelling with our tot would have been an incredible experience. We even started looking into a toddler-friendly cruise to the Fjords, because we both really want to go. Alas, we very quickly realised we were being ridiculous – not least because we all needed new passports. Eurghhhh.

I’m not sure which of us suggested it first now, but as soon as Center Parcs was on the table, there was no contest.

I’ve visited once before for a hen weekend, hubby hadn’t been but was aware of its merits. The fact that there are several around the country meant we could choose an area which was not too far to travel to, and – timed right – practically be there before Pixie awoke from her nap. That was the theory anyway… Ahem.

We were quite impressed when we looked into pricing too – as we were able to go during term time (as I write the new High Court judgement has only just been made!) five days away in a two bed apartment cost a little over £500. Not too shabby.

You May Also Like...   Why the Forest School Approach to Learning is So Good

Elveden Forest is a beautiful location. If you’re into nature and being outside, there is no beating this place. We’ve also visited Woburn but there’s just something about Elveden Forest.

One of our favourite aspects of Center Parcs is that other than your day of arrival/departure, vehicles are confined to the carpark. There’s a huge cycling culture (which is a fab way to get around), and of course the lack of cars makes the site that much safer for families – and the air that much fresher! I asked Dan if he could live there, and we both agreed we could.

It has a lovely village-y feel, with everything you could possibly want practically on your doorstep, while being far enough away not to be disturbing to young families.

There’s a shop for all your essentials (also selling and renting DVDs!); a Starbucks (that’s me sorted); a few restaurants; a beach(!); parks; outdoor activities; various indoor sports; a gym; a take way service for every food you could wish for. And, of course, the epic swimming pool for which Center Parcs is famous!

The expanse of the complex is quite something, it seems to go on and on. I don’t know precisely how big the area is, but suffice to say it’s large enough that my hubby got lost. On more than one occasion.

Disclaimer: my husband has a dreadful sense of direction.

We were a little disappointed to discover that it’s recommended all activities be booked in advance. As we’ve already established, I’m not exactly decisive at the best of times. Try me on a day when Pixie is being a Devil, and it becomes even more crucial that whichever choice I make is the right one. And that, my friend, ain’t easy.

However, we were very pleasantly surprised that we had no trouble doing the things we wanted to – presumably because we were staying during a relatively quiet period. Also, despite having heard horror stories of being unable to get into restaurants, this too was a non-issue.

We even managed to take Pixie for her first ever boating adventure! Here she is on a more recent trip:

This was quite an achievement as I had great concerns as to her attention span… It’s no exaggeration to say I envisaged her bailing in an attempt to ride a swan/bully a mallard into cuddles (she loves ducks ). However, she behaved impeccably, and I was incredibly proud of the restraint she showed by simply blowing kisses to the wildlife.

You May Also Like...   Grimms Rainbow Ideas and Inspiration For Kids (and Adults)

One thing I should mention is that the activities are not cheap. It wasn’t a problem for us because at her tender age, there were lots of things was not yet able to do – but give it a couple of years and I imagine our holiday budget will look significantly different!

That said, I think the cost to fun ratio is reasonable, and the majority of activities will be totally worth the spends.

Having said that, I do wish hiring bikes was a little cheaper… For families with older kids who themselves enjoy cycling, it’s totally justifiable; for us, not so much. There’s no way we could take Pixie for a two hour recreational bike ride, just because – and for the occasional use we’d have got out of the bikes, it just wasn’t worth the cost.

Unfortunately it’s not possible to hire equipment for just a couple of hours, which is a shame because we’d definitely have done that.

Upshot: if you have your own it’s absolutely worth taking them.

The apartments I’ve stayed in each time we’ve visited have a very similar setup: it’s a smart home from home, equipped with everything you need…

But every apartment also comes furnished with wildlife!

They say a picture says a thousand words, so judge for yourself:

One particular experience I simply can’t neglect to mention took place during a wet walk back to our apartment. It was raining heavily: hoods up, heads down weather.

As we trudged along the path, something caught my eye. At first I thought I was seeing things but I stopped short nonetheless. As I very carefully watched the earth to one side of the walkway, I saw my eyes were not playing tricks on me – it really was moving!

I called hubby back and we stood in the downpour patiently and expectantly watching for a good 5 – 10 minutes. The creature creating the shifts in the soil was clearly shared my hubby’s sense of direction – it moved backwards and forwards without ever making very much progress.

It was fascinating to watch, alas it never did pop its head out.

We didn’t eat out in the evenings as it’s just not feasible at the moment.

But we did have lunch out most days, and I’d be doing you all a massive disservice if I didn’t urge you to get yourself camped out in the Pancake House. Divine.

I’m totally gutted they don’t have these in every town – although my waistline is grateful.

Service (almost) everywhere we went was excellent. Apart from one miserable guy, who I suspect had just been dumped, nothing was too much trouble and everyone wore a genuine smile with their uniform. This was a really nice feature for me as I’m big on courtesy and manners – though I find myself expecting great service less and less! (I kind of think if you don’t like people then you shouldn’t work front of house. Yet so many do – why?)

Anyway, no such issue here (I forgive the dumpee for being the one anomaly).

Before we went hubby had told me (several times) to book myself a massage. Alas, I felt the cost – while not strictly prohibitive – was unjustifiable.

But, in true chivalrous style, hubby booked one for me as a surprise. (I know, I’m a lucky gal.)

One the day of our arrival, hubby returned the car to the car park and got lost for over an hour (I kid you not, I wasn’t joking about his sense of direction). It transpired that his difficulties arose from making a ‘quick’ visit to the spa en route back to our apartment. Bless his heart.

My massage was wonderful. Sadly, it did not cure my chronic sciatica, but it was a gorgeous experience nonetheless.

The venue itself is clean and fresh, the staff are lovely, and there’s a wonderfully peaceful ambience.

Heads up: I wish I’d been aware prior to venturing in of the exquisite-looking cafeteria, which is for the exclusive use of Aqua Sana guests. Had I been more prepared, I would undoubtedly have popped in for a coffee and one of their beautiful cakes! Next time; definitely next time – I’m already looking forward to going back when Pixie is a little older.

Have you visited a Center Parcs? Which is your favourite and did you love it as much as we did? If you found this Center Parcs, Elveden Forest review helpful, please consider sharing.

How Can We Protect Our Children from Bullying?