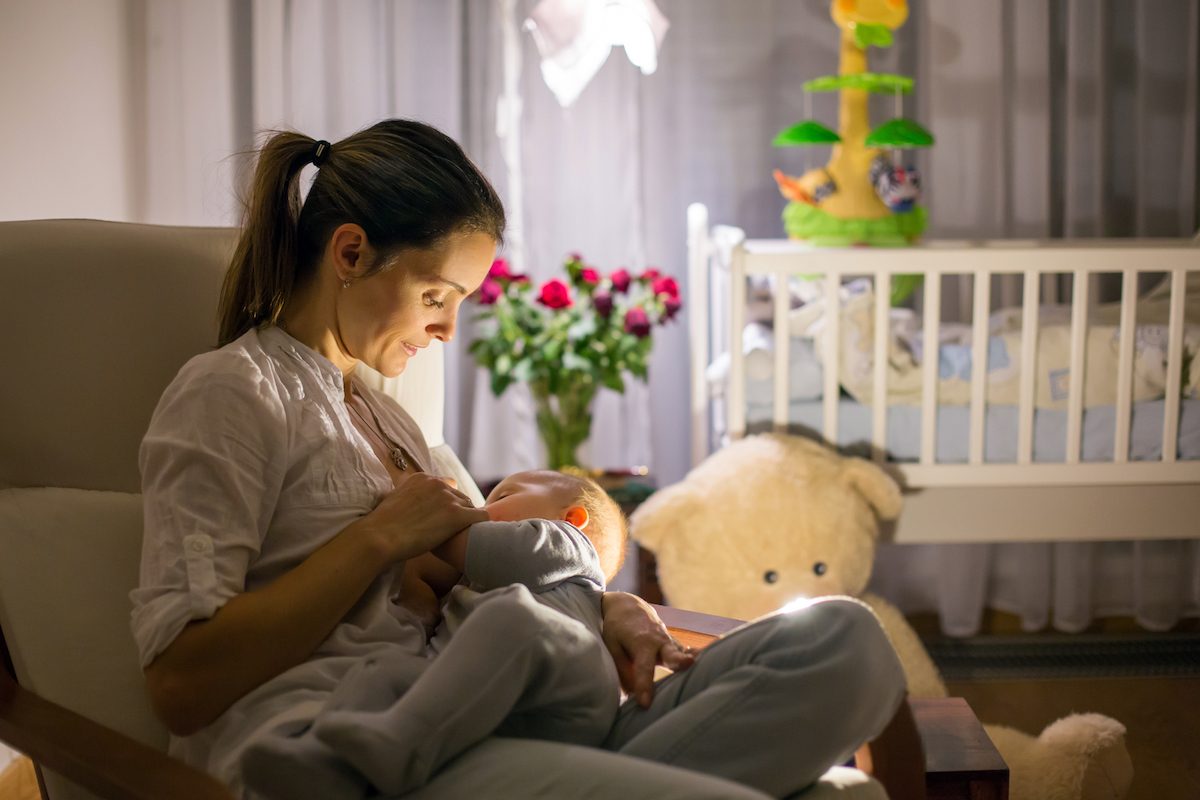 Home » How to Gently Night Wean a Resistant Toddler

Are you looking for breastfeeding support with how to stop breastfeeding at night? Gentle night weaning might be the answer. Below are the exact steps I took with my eldest daughter. And they worked: night two she slept through, and one or two hiccups aside, we never looked back.

When we thought about starting a family, I knew my ideal was to breastfeed. I knew there was an enigmatic ‘art’ to it, but I knew very little else. (As an educated, extended breastfeeder, I now understand there’s a technique, rather than an art! You can find out about that and more in my ebook, if you’re interested.)

But a very important aspect of breastfeeding that I gave no thought whatsoever to was that there would also come a time when I would have to wean my child, aka boob monster.

I think if I’d been pressed to give it due consideration, I’d have first said that I could hardly imagine my baby reaching that milestone and didn’t wish to tempt fate. I may have naively gone on to suggest that it would take its natural course, or be a simple case of switching from breast to bottle – ET VOILA!

As with every other surprise thrown at us by our precocious daughter, I didn’t take into account the fact that I was dealing with another human being, a headstrong and tenacious little girl – with her mother’s blood coursing through her veins.

But I did get there, and surprisingly simply…

A close friend’s daughter is eight months ahead of our Devil Pixie. I don’t think I’ll cause offence by saying that her daughter has been at least as bad, and very possibly worse in terms of clinginess and (lack of) appetite. We’re both strongly pro breastfeeding, anti CIO, and pro gentle parenting.

So imagine my surprise when she told me she was night weaning! And imagine my shock when shortly thereafter she announced that her little princess had gone through the night for the first time ever!

This came about because her daughter, like mine, was: a bad eater; constantly over-tired (read miserable and bad-tempered); often clingy. Or, in pain language, hard work!

Neither of our girls understood the value in naps or the point in solids.

And it wears you out, physically and emotionally. (I don’t think it’s any coincidence that we both weigh significantly less post-baby than pre-baby.)

You May Also Like...   11 Cheap or Free Ways to Entertain Kids During the Summer

So when my sweet girl decided to revert from her improved waking of twice a night back to SIX-TIMES-PER-NIGHT-PLUS-MULTIPLE-TIMES-IN-THE-EVENING – I decided to have a go myself. (She was also super-clingy in the mornings, refusing breakfast and instead wanting to be constantly fed.)

Disclaimer: I don’t have any magic formulas and certainly cannot make any guarantees that what has worked for us will work for you too. I simply hope that sharing my experience of how to night wean may encourage you to do the unthinkable and just get on with what you suspect needs to be done. If you’re contemplating it, it is time.

How To Stop Breastfeeding At Night

I didn’t really have a strategy in place, but I knew one hour after going to bed nursing was not for nourishment – and I therefore had to withhold at that point.

I also knew this first night was going to be hellish and loooong. But EVERY night had become a time to dread anyway, so what was the difference?

She went down as normal, and – hallelujah – she stayed down through the evening (a rare treat!) until we went to bed. I was ecstatic she didn’t wake sooner because I felt it was acceptable to feed her at that point, which I duly did. When she next awoke, a couple of hours later, I knew it was time… So I went to her and told her ‘all gone’. She knows the words and I knew she’d understand the concept.

Several months ago, we removed the cot in the nursery. I was getting backache from leaning into it multiple times in the night to lift my growing daughter. Something had to give. At my wits’ end, I came up with a plan to try to improve the situation and make things as comfortable as possible while she cried and tantrumed for over an hour. I still use this technique today, and it has really made such a difference to the horrors of my nights!

But I held her and held strong: I did not give in. She eventually went back to sleep and didn’t wake again till the morning.

She went down as normal. She woke the following morning.

Were you expecting more detail? Okay….it was blissful.

She went down as normal and woke around 3am, at which point I fed her. She easily went back off till 5am. I fed her again and we got up at 7am.

Basically, how to night wean has proved that simple. There’s been a variation of what time/s she wakes, but incredibly (other than when she has been unwell) she has woken only once or twice since I started the process. Unfortunately, these episodes occasionally last for around an hour before she will sleep again, but otherwise? I have been impressed with her progress.

When she recently had another bad night, I repeated the original method; the following night she again went through. I’m convinced it’s about consistency – and this is a good place to add that I have followed through with the ‘all gone’ message in the mornings too. Perhaps this has helped her to fully comprehend the idea?

I’m not sure, all I do know is that she is sleeping better and eating better throughout the entire day. She’s also less clingy when she gets up in the morning. Win.

How to Night Wean a Resistant Toddler, Gently

My technique, which started very crudely but I have now refined, is to refuse her feeds unless she has slept for a minimum of 3 or 4 hours. I was concerned she would be confused by this: sometimes rewarded with milk, sometimes not.

You May Also Like...   Why I'm Not Making New Year’s Resolutions, and What I'm Doing Instead

But I believe she is smarter than I gave her credit for; I think she understands more than I guessed and is more resilient than I allowed for. She’s caught on exceptionally quickly and is far happier for it – we all are.

Should I Have Gently Night Weaned Months Ago?

It’s impossible to say. Perhaps she wouldn’t have been ready to night wean, or maybe we’d have saved ourselves a few stressful months.

Perhaps it’s irrelevant because in order to follow through, I needed to be ready too.

Two months ago, the very idea of giving our daughter a sibling felt like a sick joke; following this process we began to seriously consider the possibility. I felt like a failure because I was losing control of a situation that I didn’t know how to handle. I was in a dark place when I took what felt like the absolute last resort.

And I have to admit that gently night weaning our resistant toddler has changed our family for the better – there’s light at the end of a restful sleep.

It’s only fair to make very clear that this process may not work for your child. I know, because I’ve followed the method precisely with my second daughter at 19 months old – and two weeks on she was still waking frequently asking for milk.

So, bear in mind that if being gentle is more important to you than ensuring results, then you may be disappointed. As I’m writing this update, I’m very, very disappointed: considering-adoption disappointed. I jest, I think, but I’ll take this opportunity to remind you (and myself) that regular waking is both natural and a safety mechanism.

Will My Baby Outgrow Feeding to Sleep?

I could remind you that you won’t get this time back and you should cherish every cuddle etc, but when you’re on-your-knees-exhausted like I am right now, I know you won’t want to hear it. You have my sympathy.

Perhaps it’s better in this moment to remember that in a few short years, it will be possible for you and your significant other to have weekends away again, just the two of you.

Anyway, as you embark on these steps, I wish you the greatest luck that you’re blessed with a more compliant child than my second-born.