Traditionalist AND Feminist – and Proud

Home » Traditionalist AND Feminist – and Proud

This post was originally published back in July 2017, in response to the backlash I received to another post I’d written a few days before. And it feels apt to reshare in light of the so-called ‘trad wife’ movement.

I never expected to have anything supportive to say about trad wives, because – make no mistake – I’m firmly behind women’s rights and equality. And women undermining the very thing we and the generations before us have worked so hard for is nothing short of distasteful. It’s damaging, ungrateful, and extremely disappointing.

BUT – it’s important not to lose sight of the bigger picture: a part of feminism is recognising when women’s rights are stripped away in the name of the very thing they’re designed to protect.

It’s necessary to condemn practices which hold women back; it’s also necessary to support the women who choose a traditional family role (and their partners). It should always be about choice – not expectation, and not making a statement.

I’m writing this just a few days after publishing what’s become the most (un)popular post in the history of my blog. Whilst I was aware that it might be perceived as a little controversial, I was genuinely surprised at how provocative it turned out to be, hence writing this follow up.

It was not my intention to offend people, but – based on some of the comments left on the post and on social media – I clearly have done, albeit inadvertently. I’ve been wanting to respond to all those comments since, but due to commitments (not least a small baby and a toddler) this is the first opportunity I’ve had.

That’s not for want of trying: this weekend hubby has taken a key role – otherwise known as his share of the responsibility for our family. As he does every weekend. And evening. And waking moment. Except those during the dark hours of the night because, alas, he does not possess a pair of lactating breasts (though I suspect he may wish otherwise).

You May Also Like...   How Can We Achieve a Positive Attitude to Body Image?

Anyway, I decided it would be quicker and easier to write another post than to respond individually. So here we go…

We’re Grown-Ups, So Let’s Be Grown Up

For a start, I didn’t set out to fall out with anyone. It’s not in my nature and I won’t be drawn into arguments. The purpose of this post is not to retaliate but to clarify my position, because several incorrect assumptions have been made. That’s understandable and I’m not offended, but nonetheless I want to put the record straight:

If you’re going to be angered to the point of a diatribe directed at me, I’d like to at least make certain that your anger is not misplaced.

It didn’t occur to me that I’d need to spell this out but the last few days suggest otherwise, so… The majority of my posts are merely my personal opinion; anyone reading is welcome to add to what I say and begin a discussion rejecting my viewpoints. That’s why I leave comments open on my blog and why I publish every (clean) comment submitted – positive or negative.

By owning a website and publishing content to it, I accept that I’m inviting opinion and that those reading what I write won’t always see eye to eye with me. That’s fine, I don’t expect everyone to agree with my perspective; of course I don’t. That said, I do try to be diplomatic for the most part.

It’s true I have strong values, but I’m genuinely interested in what others think – and if we disagree that’s okay. I won’t bicker until one of us backs down. I respect the right of everybody to have their own ideas and won’t enter into an altercation simply because we differ. I find it bizarre that so many adults appear to believe that futile option is the only way for a disagreement to play out.

On that note, let’s take a look at exactly what I’ve said that’s caused so much indignation…

You May Also Like...   The Day Dr Chris & the BBC Failed to Advocate Breastfeeding

Essentially, I’ve been accused of being stuck in the 50’s and of being part of the problem that’s keeping the glass ceiling in place. I’d like to correct this mistaken assertion.

Why I’m A Feminist

In case I wasn’t clear about this in the first post, there’s more than one way to shoulder your responsibility for your part in the creation of any tiny people. Getting up in the night is just one; another – equally stressful I’d wager – is providing for them. I know my husband feels the full weight of his responsibility to go to work and earn the money that keeps a roof over our heads and food in our bellies.

So please, using the above anti-feminism argument just doesn’t wash. You may ask why his tiredness trumps yours, but that’s not what this is about. It’s about respect and understanding going both ways.

The roles of men and women are evolving – and I applaud that progressive change!

I was also accused of making dreadful assumptions about which (if any) parent was staying at home with the children and which was the breadwinner. If you re-read my post you’ll notice that in several places I use the term ‘partner’. This was absolutely deliberate. The only reason I resorted to gender stereotypes a couple of times was for SEO purposes. Because, bottom line, if one parent is breastfeeding then in a typical family the other parent is the father.

That will not always be the case – which is fine – but in terms of probability, my argument stands up. And when it comes to SEO, probability is all we have to go on.

You May Also Like...   Fun Bags - First for Men, Then for Babies

If I respect Google for anything it’s for its lack of discernment when it comes to being politically correct.

The final reason my post annoyed some readers was the clickbait-y title. Reading between the lines I have to presume those people at least understood the true sentiment behind my post, and that they therefore felt the title was slightly misleading.

I won’t pretend I don’t write in order to be read. I still *try* to ensure the title reflects the content. Sometimes it’s difficult to find the perfect balance.

I wrote in a comment thread somewhere that I should perhaps have added an asterisk at the top of the page saying *if your situation mirrors mine. In the end I chose not to because honestly, get a grip. It’s surely obvious what I was getting at, unless you clicked onto my post actively seeking an argument.

Traditionalist AND Feminist – and Proud

My final word is this: I stand behind my personal belief that if a mother is a breastfeeding SAHM and her partner is working full-time, there’s little point in them both getting up in the night – and even that I think it’s harsh to expect them to. Obviously (or not!) things change when a second child is introduced; or the mother is returning to work; or there’s illness; or the mother’s wellbeing is in question.

Again, obviously (or not) every family has to find what works best for them. My husband and I share our roles within and responsibilities to our family, but also keep some traditions which suit us. And that’s the way we like it. It’s the ethos that best fits our values.

So yes, in general, in my circumstances, I still believe what I wrote. 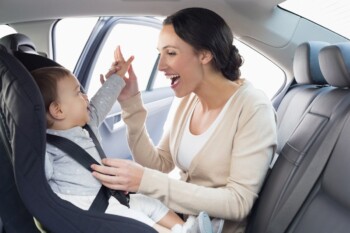 Let’s Talk About #MeToo, Because – Me Too